Home› Suggestions and Requests
Summoners, the Necrosword Crystals (the crystals in the Knull Cavalier Preview Bundle) currently have a higher than intended drop rate of 6-Star Champions.

RandomlyGenerated Posts: 120 Content Creator
February 2018 in Suggestions and Requests
So a few points before going into the explanation.

This idea is very much inspired by Marvel Future Fight. I am not an avid Future Fight player...so if I got anything wrong, well too bad.

This whole post and suggestion might be a massive waste of time...but I don't care, been thinking about this since I saw Shadowland in MFF and personally I really like MCOC and think this (or a similar game mode) can be great for the health and longevity of the game.

Very much open to discussion/suggestions/criticisms in the comments.

Inspired by a similarly named game mode in MFF, Shadowland is a 30 level weekly challenge.

* Each level will consist of 1 fight.

* The encounters are set with every few patches. With new champs and altered nodes being added every 6-9 months.

* The nodes, the champs, and their attributes increase with every level. You will be able to spectate all encounters before entering them.

* The player can enter any level with 1-3 champs, but every champ in your roster can only be used once. (The same champ of a different star level, would count as a different champ.)

* If you fail in clearing a level, you will not be able to revive/heal. Your progress will be reset, and you'll have to start the entire challenge over.

* Each time you fail, the cost of entry (in units) will increase. Exponentially. The initial 2 entries should be free.

These stages should also include **strong restrictions**. Imposed by a similar model as in 5.3, but even more sever (e.g. all champions but skill have their attack reduced by 90%, or all non villain champions have their offensive abilities reduced by 90%).

This level should be created to act as a *seemingly* unreachable goal even for the most advanced players. A mixture of strategizing and expanding the roster will eventually allow a group of players to complete the challenge. 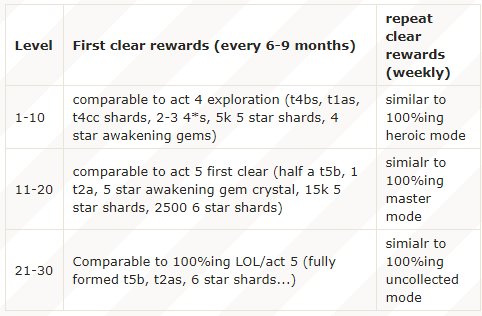 * potential on gaining a week long legends badge by speed running the content without having to spend 4 hours speed running the monthly event (the entire clear with good planning and fitting roster, masteries and boosts should only take around **40-60 mins**.

* giving utility and purpose to the very much forgotten part of our rosters. While you'll still probably use the trinity to beat level 30...you will have to make it there first. This will be a breath of fresh air for the big chunk of champs who are not awful, but at the same time aren't the best at a particular situation.

* Entry fees will incentivize spending (the spending will however be minimized due to the community coming together and strategizing).

* More incentive than every before to acquire brand new champs. Kabam can release champs that directly counter some of the most challenging levels of Shadowland, thus making completing it much easier to grinders or spenders who can get their hands on them quickly.

A game mode similar to this will probably never see the light of day...regardless, if you like the idea, maybe go ahead and support it.