Dr. Strange buff, to strengthen his claim on being the 'Sorcerer Supreme' 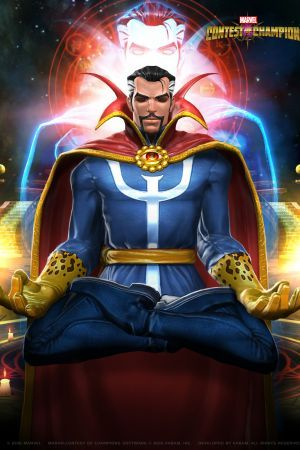 Hi guys
This MCU meme teleporter could use some additions, especially after the years of where the contest have developed...
Under Oshtur's Refuge
- 90% chance to turn opponent's buff into the opposite debuff on basic attacks (eg. Regeneration into Degeneration)
- and 100% chance to Absorb or turn a debuff into an opposite buff for Dr. Strange on basic attacks. "Absorb" stores and pacify debuffs to be later "Bestowed" to opponents through Special Attacks.
- 3rd Special Attack, causes "Exorcism". Formed by the help of minimum of three debuffs on the opponent and also from the "Absorb" debuffs on himself. "Exorcism" reduces all attribute ratings of the opponent (Armor, Resistances, Attack) and 100% chance to block their chance to trigger buffs or giving out debuffs. The more debuffs are used, the more potent Exorcism's attribute reduction will be.

Signature ability
Under Osthur's Refuge
- X% chance for opponent's buff (and Unique buffs) to be given to Dr. Strange instead, while the opponent gets a debuff version opposite to their supposed gain buff. Like if Colossus supposed to get his Armor, he gets Armor Break instead while Dr. Strange take that Armor for himself.
- 3rd Special Attack consumes existing buffs and turn into "Empower", he Bargains three blessings to be used all at once. Raising attribute ratings and improves the blessings potency... all by X% for 13 seconds

In conclusion, I want to make Osthur's Refuge as Dr. Strange's momentum for a 'Saiyan' form and for him to keep 'control' and 'counter' opponents.