Home› Suggestions and Requests
Summoners, the Necrosword Crystals (the crystals in the Knull Cavalier Preview Bundle) currently have a higher than intended drop rate of 6-Star Champions.

The character mcoc needs, whether they know it or not

GoddessIlias Posts: 594 ★★★
July 22 edited July 22 in Suggestions and Requests
Ladies and Gentlemen of the forums,

First, to the mods. Please don’t move this post to the graveyard that is the “Suggestions and requests” tab, or at the very least, please wait a few hours before doing so. It took me a couple hours and multiple Dr. Peppers to cobble this together at midnight, and would love if my passion and insomnia were rewarded with at least a few insightful reactions (Have you seen my disagree/agree ratio? I need them.)

Secondly, to the readers. This is a long post. Some would even say this is a post so long that it makes the most glorious bibles of DNA3000 look like a “yea” response from a friend after texting him implicit, detailed instructions. So if you want a TL;DR, just go to the bottom, I put it there. If you read this whole thing, thank you, I’m flattered, but you scare me.

Also, SlayerOfGods stole some of my thunder on Twitter already >:C. It was my idea first

Over the past couple of days, with the announcement of Spiderman 2099, it has become clear to me and others that the game needs fresh faces. Familiar, yet new and exciting characters that both casual Marvel enjoyers and hardcore maniacs alike can rally behind. To me, it has become clear as to who should be the standard-bearer for a fresh new breed of Mcoc champion, and below you shall find various images of this character attached. 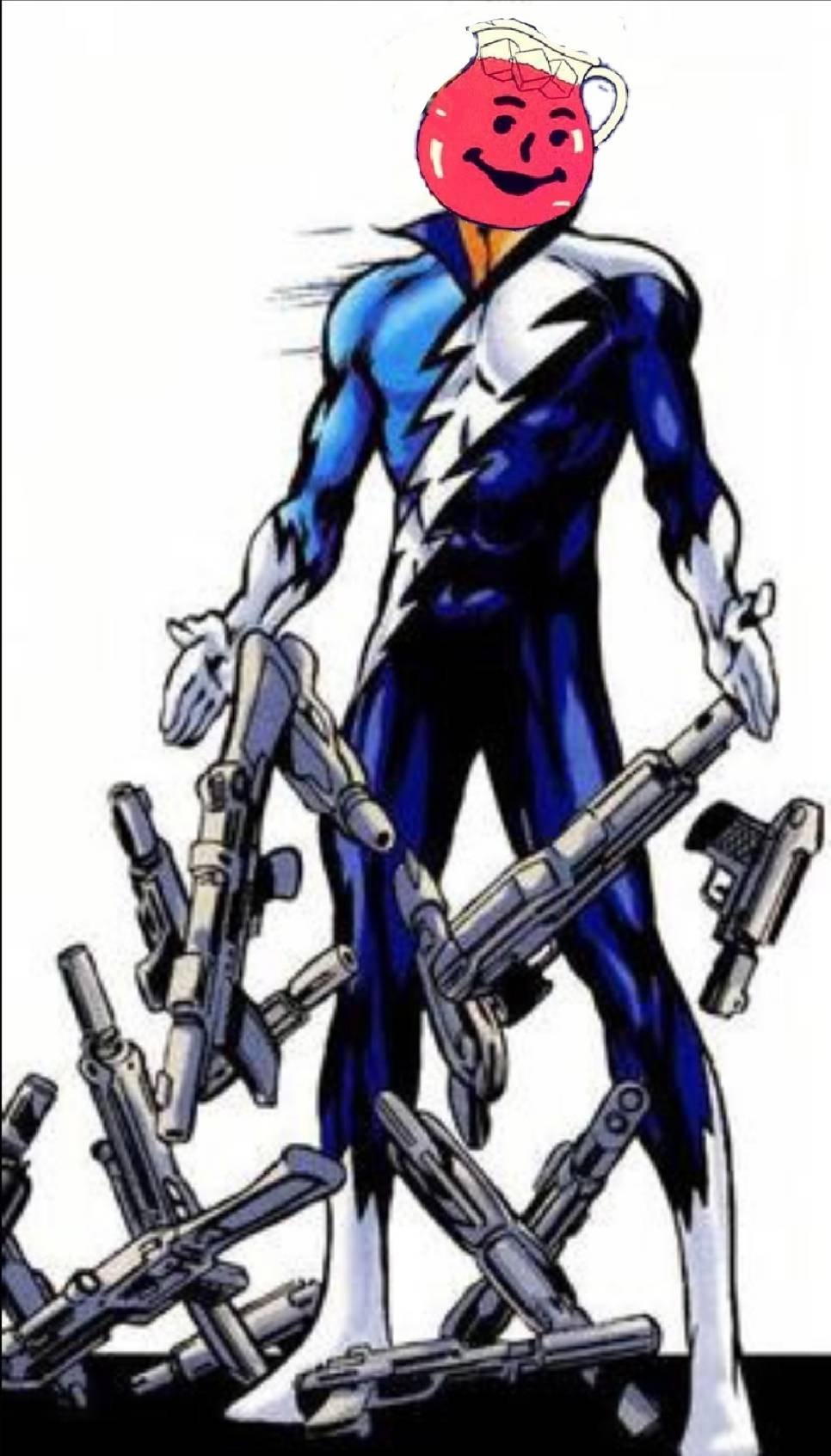 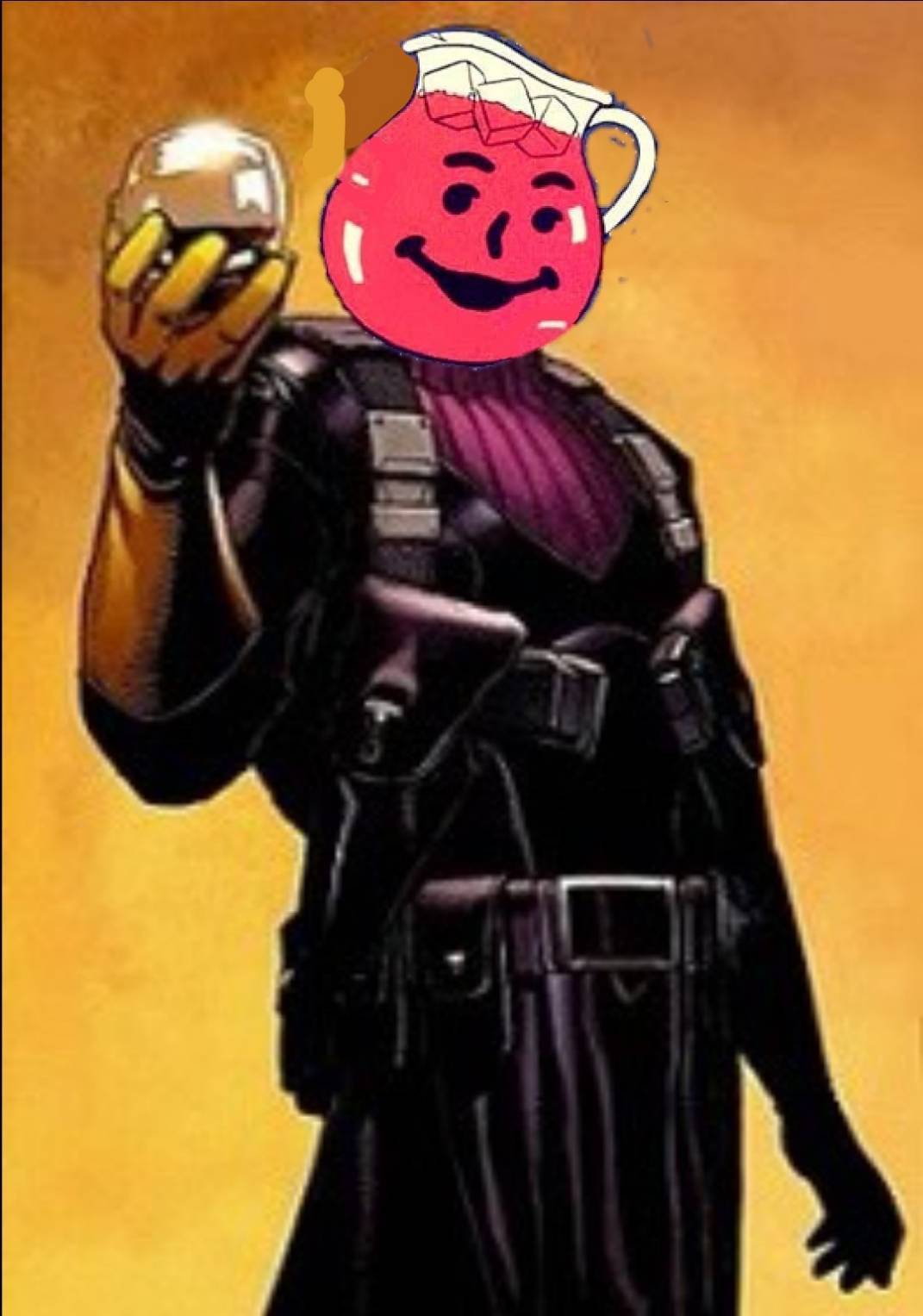 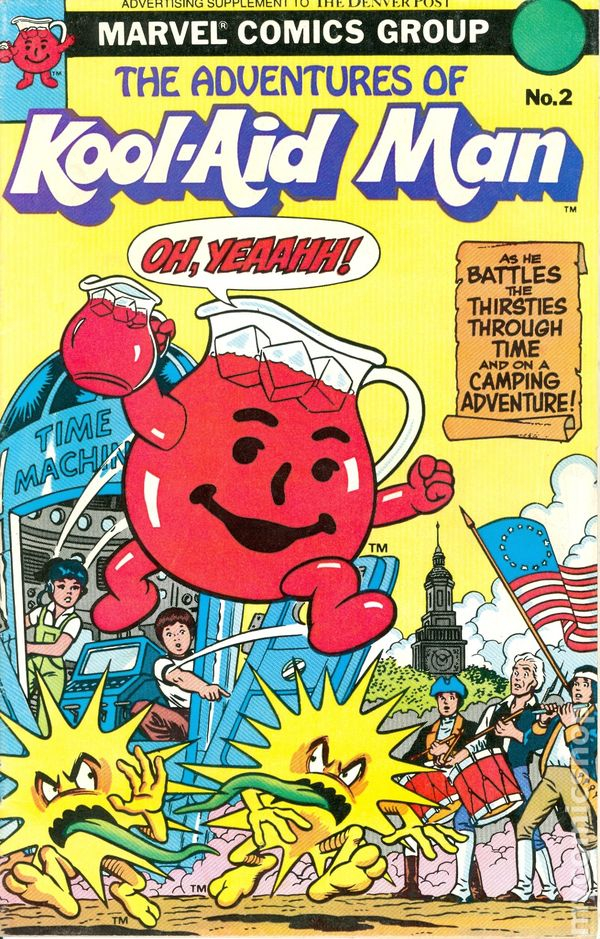 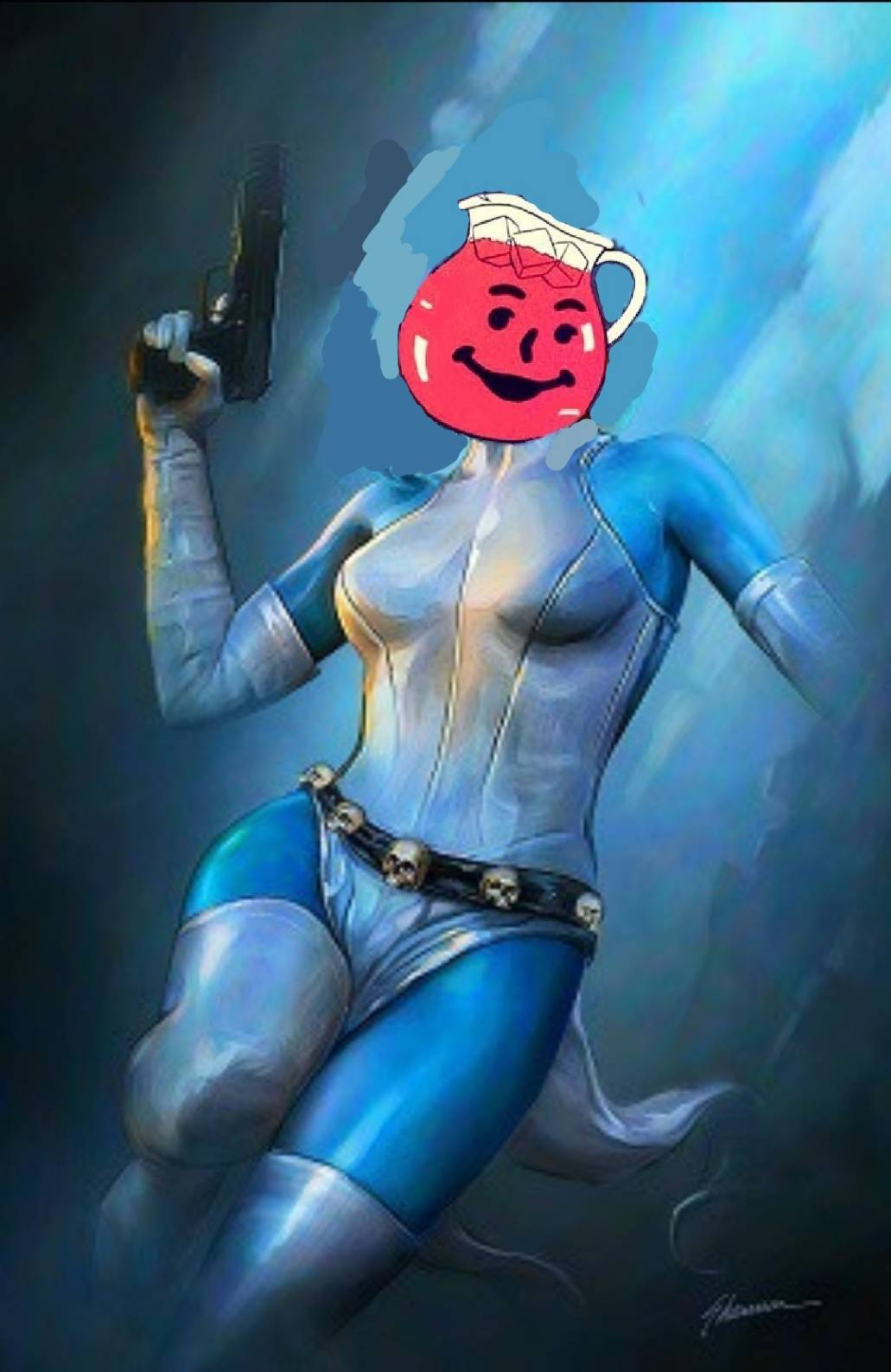 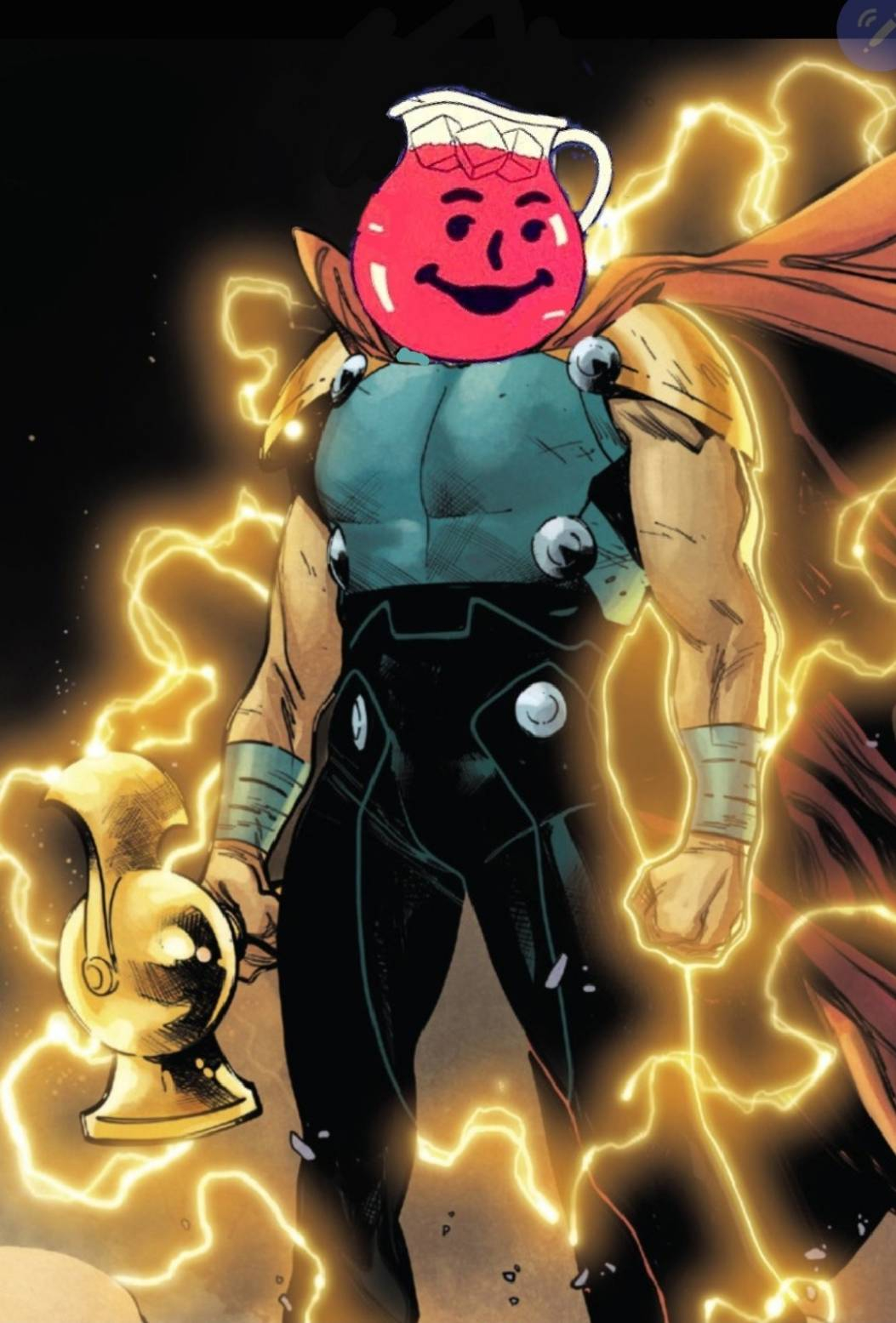 That’s correct, this new character is Kool-Aid Man, and without further ado, I present his “Champion Spotlight”

Kool-Aid Man is a damage oriented character who possesses some unique utility from his signature ability. Much like Moleman, Kool-Aid Man has a “damage mode” and a “Utility Mode”, but unlike Moleman, Kool-Aid Man can rapidly swap between the two based off of what he needs, and even carry over his attack boosts from one mode into the other. In his OH YEAH! Mode, Kool-Aid Man gets a multitude of large Fury passives and lands guaranteed critical hits, but staying in this mode for too long causes him to suffer large amounts of self damage due to fatigue, as is reminiscent of Bishop before his buff. Additionally, the Fury passives expire much faster for every one Kool-Aid Man gets, making the big damage a high risk proposition.

Immunities: Kool-Aid Man is immune to bleed, incinerate and nullify, and suffers 100% reduced damage from coldsnap, making him a very viable option to many tough damage-over-time fights.

Suicide Masteries: Kool-Aid Man was practically built to be used with suicide masteries, with his signature ability providing selective immunity to recoil damage, and if his signature level is high enough, healing from the liquid courage mastery. This is not without risks, as his “Don’t drink the poisoned Kool-Aid” can hamper Thirst management greatly.

Raw Damage: Kool-Aid Man has insanely high burst potential in skilled hands, swapping in between OH YEAH! and resetting his Thirst in order to go again.

Short Fights: Kool-Aid Man is barely worth using in short fights, due to his medium-long ramp-up time and painfully low damage before being ramped.

If Kool-Aid Man is attacking or defending the final node in a quest, these damage values are doubled.

Additionally, while below 100 thirst, Kool-Aid Man takes no damage from the Recoil mastery, and gains 15 Thirst when Recoil would trigger.
Cooldown: 20 seconds

Dev Notes: The sig is geared towards making Kool-Aid Man a powerhouse with suicide masteries and greatly decreasing his ramp-up time at the cost of potentially escalating Thirst too high. Without suicides, at high sig it could also help Kool-Aid Man endure some other “Low” sources of damage such as Bane and Limbo, potentially even making him an alliance war boss option due to his unique ability to tank small sources of DOT.

Kool-Aid Man is immune to Nullify and Stagger while below 100 Thirst. Whenever a Nullify or Stagger effect would trigger on Kool-Aid Man, lose 10 Thirst.

Dev Notes: Kool-Aid Man’s massive furies are slightly offset in this way, by him having no critical hits while below 100 Thirst, while his immunities come at the cost of his Thirst generation being affected in various ways that can either help or harm him.

If Kool-Aid Man is suffering from a poison debuff, he cannot reduce his Thirst except by using his Special Attack 2 or 3.

Dev Notes: Kool-Aid Man is a powerhouse with suicide masteries, but it comes at the price of him having no way to reduce his thirst without specials, making his power bar vs. Thirst bar potentially very difficult to properly manage.
Thirst

Kool-Aid Man grows more thirsty as the fight goes on, and his thirst has various effects on his stats. Thirst starts at 0 and goes up to 100.

Kool-Aid Man passively receives a penalty to his Physical Resistance up to 800 based on Thirst. At 100 Thirst, this is disabled.

Kool-Aid Man gains 10 Thirst every 5 seconds while not at 100. If Kool-Aid Man is affected by an Armor Break debuff, this is disabled.

Dev Notes: The most important part of Kool-Aid Man’s kit. Managing Thirst vs power will make or break the effectiveness of the character, and how long his bursts of damage can last.

Dev Notes: The second cornerstone of Kool-Aid Man’s abilities. Kool-Aid Man gets guaranteed critical hits and is fully unblockable during this phase in addition to gaining large Fury passives, but if he stays in this mode too long, or loses his fury passives, he will suffer greatly for it.

On the Pre-fight screen:

Once per quest: On the Pre-fight screen, Kool-Aid Man can consume his prefight charge to begin the fight with 100 Thirst and 1 bar of power.

Dev Notes: Similar to Human Torch, Kool-Aid Man can use this on the hardest fight in a path to gain a big leg up on the opponent, and come flying right out of the gate.

While charging his heavy attack, Kool-Aid Man drinks to quench his Thirst. The amount of Thirst lost per second increases the longer the Heavy attack is charged. This effect is disabled during OH YEAH! Mode.

Dev Notes: A simple way to control Thirst levels when you need it. Whether you need Kool-Aid Man’s signature ability to avoid some damage, your power bar is too low to exit OH YEAH! Mode properly, or are almost capped out on Furies, this will help prevent you from reaching 100 Thirst.

Dev Notes: Note that the Fury passives will reset with duration equal to the lowest fury duration, so with lots of Furies, the player will need to perform this action quite often.

Inflicts a 12 second non-stacking Power Drink debuff on the opponent. While active, 40% of the power the opponent would gain is drained and given directly to Kool-Aid Man.

Dev Notes: Another built-in way to keep Kool-Aid Man’s Thirst low, and it comes with a small bit of power control.

Upon activation, gain 100 Thirst if not in OH YEAH! Mode.

If Kool-Aid Man has 2 or fewer Fury passives, this attack only uses one bar of power.

If Kool-Aid Man has 3 or more Fury passives, exit OH YEAH! Mode and reset Thirst to 75 as soon as this attack finishes.

The biggest burst of damage Kool-Aid Man can dish out, this attack deals startlingly high damage, at the cost of a “Soft reset” of Thirst at high amounts of Fury, which could lead to prematurely hitting 100 Thirst.

Gain a 30 second non-stacking Cruelty buff, increasing critical damage rating by 1900. The duration of this buff is paused whenever not in OH YEAH! Mode.

Dev Notes: This is the “Hard reset” for Kool-Aid Man’s Thirst, granting him a large permanent cruelty but also forcing his next ramp-up into OH YEAH! Mode to require a significantly larger amount of time.

No Wall Can Stop Me

Rhino: The chance to go unblockable during a dash is doubled.

Spider-Ham: Whenever a Porker Popper is reapplied, gain a 1 second Unblockable buff. This buff is paused during both champions’ special attacks.

Diablo:After drinking from his flask, gain immunity to Incinerate and Coldsnap for 10 seconds.

Kool-Aid Man: When Kool-Aid Man’s Pre-fight is active, the window for OH YEAH! Mode to start damaging him is increased to 20 seconds.

Kool-Aid Man: Kool-Aid Man’s Special Attack 2 reduces his thirst to 50 instead of 70.

I made a character concept of Kool-Aid Man, Mcoc needs him asap even if they totally destroy my design, also special thanks to Agent X ZZZ, ElSpud, and Mobile Potato for design insight. Here’s the link, I guarantee he’s at least better designed than the DDHK nerf.
https://docs.google.com/document/d/1ln-ZsmQVcFamyqCfNKp4QO40WUVZSl6MAlz23Pckcz4/edit?usp=sharing

If you agree that mcoc needs this character, or liked the design, drop that big fat insightful down below