Home› General Discussion
**Login Issues - Update**
Summoners experiencing error messages during login, we have been manually navigating around the issue for each player; you should be able to log in again!
We will be releasing a hot fix in the next day or two to resolve the issue entirely.

Why Man-Thing is better than Doom 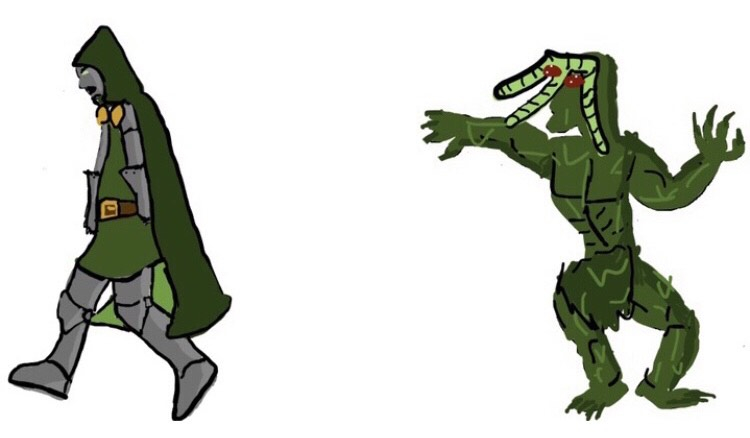 At long last it is here. The moment maybe 3 of you have been waiting for. Why Man-Thing is better than Doom. This, as promised, is going to be the length of an average DNA post, so by all means go down and comment, "I ain't reading all that. I'm happy for you though, or sorry that happened." This explanation will cover all the main aspects of the game, Abilities, Damage, Utility, Animations, Overall Enjoyment, etc. So now be ready to have your minds blown when I explain to you why Man-Thing is better than Doctor Doom.

Now many of you might be aware that Doctor Doom is pretty good in this game. And most good champions also have a good set of abilities in their kit. He has the basics, Nullify, Power Control, DOT, pretty much everything you'd expect from a Mystic champion in this game. Man-Thing, not only has Nullify and DOT, but he also has Power Control. In a pretty unknown synergy with iBom, MT can reduce the opponents Combat Power Rate significantly during his loop. Many of you might be familiar with the Doom Loop, where he can keep the entire fight controlled by looping his Sp3, but are you familiar with the Man-Thing loop? The Man-Thing loop is by far the most effective and fun way to play with your Man-Thing. In short you are going to need at least 2 points in Mystic Dispersion to use this effectively, I currently run 4/5 which is the best way in my opinion. To get started with the loop get to your Sp1, use it, and use your heavy attack. Rinse and repeat until the opponent is dead. With all of the Poisons/Armor Breaks you are going to be stacking, this will happen in no time. This loop is superior to Doom's because it is simpler, and it is cooler.

Doom has always been known for his incredible ability to keep most fights int he game completely under his control, but no one ever really talks about his damage. It is pretty good with the furies he gains from his Sp3 loop and the Sp2 Incinerates, but pales in comparison of the damage of Man-Thing. Man-Thing can hit really hard when ramped up. Even with only 6 Armor Breaks on the opponent, MT is already hitting harder than Doom. 20 Armor Breaks is the most I've ever been able to get, and his damage surpasses Doom's 4 times over with that amount. I haven't even mentioned his Poisons yet. His Poisons is where the damage really picks up. At 6* r3, each set of 3 Poisons per loop is dealing about 3000 ticks per second. And that is with just one loop. When you stack loop upon loop, in addition to the Armor Breaks, the opponent just melts before you can even blink.

Honestly when it comes to overall Utility, I'd say that Doom probably wins. No matter how God-Like MT is, you can't deny that Doom has incredible Utility. I'd say his Utility is on-par with iHulk's ability to bypass No Retreat degen damage. He has some of the best Utility in-game. Power Control, Nullify, DOT, Shock/Armor Break Immunity, Heavy Stun, Tankiness, etc. While in the grand scheme of things, Doom's is better, but Man-Thing's is also really good. Nullify, Poison, Armor Break, Regen, Fury, Bleed/Armor Break/Crit Immunity, Unstoppable, and is cracked with MD. Man-Thing still is a God when it comes to utility.

Animations have always been a strong-suit for 99% of champions in the game, and Doom's and Man-Thing's are a great example of this. They just feel so good to play, and they are just both so smooth with their rotations. Not only that, but their VFX just feel very true to their characters. Props to Kabam's Animation team for all of the incredible animations they put out on a Monthly basis. Each new character just feels so unique is they way they look and the way they play. But I personally would like to shake the hand(s) of the person(s) who animated Man-Thing. Every single aspect animations wise they nailed perfectly. I've always been a big fan of the character, and I'm glad I get to use a champion who is incredibly fluid and fun to play.

I have made it apparent that Man-Thing is my favorite character to play as, and for good reason. He is just so incredibly fluid to use with his entertaining and rewarding play-style. As I mentioned previously, Doom is also very fluid to play with his incredible animations. But he falls flat for me for overall fun. He goes into a similar situation for me with champions like Quake. Where if their optimal rotation isn't that fun to use, then I'm probably not going to use them. I can understand why people like using Doom and Quake, but for me, I use them as a last resort solely because of how much I dislike playing them. Which makes me glad that there are loads of fun champions with great rotations. Man-Thing, Venompool, and Sentinel are the three champs that I have the most enjoyment using.

Now this is the reason on how we should justify how good champions are, how Chill they are. As I have said in the past, Man-Thing is the single most Chill champion in the game. No one even comes close, it is not even a competition. Everything about him is done in the most Chill way possible. His Basic Attacks, his Special Attacks, even in his victory animation. There is literally not one thing he does that is not Chill. Doom on the other hand is a whole different story. As I remember Doom was near the bottom of the tier list. They only thing keeping him from the bottom was his victory animation, as we don't know what face he is making underneath his mask. He could be smiling, or he could be frowning, we just don't know. In whole he is a selfish human who only cares for himself and trying to be edgy. Man-Thing on the other hand is a being of pure empathy, as he cares for other people more than himself. Which is pretty Chill in my book.

In conclusion of my essay, I hope many of you can now see the light of how great of a champion Man-Thing is in this game. When he was first released on October 17th, 2019, he was just written off as a worse Dr. Voodoo. He was overshadowed by Guilly 2099, and Elsa Bloodstone. But I hope now that people can see that Man-Thing > Doom.