Guesses For the New Champion Puzzle 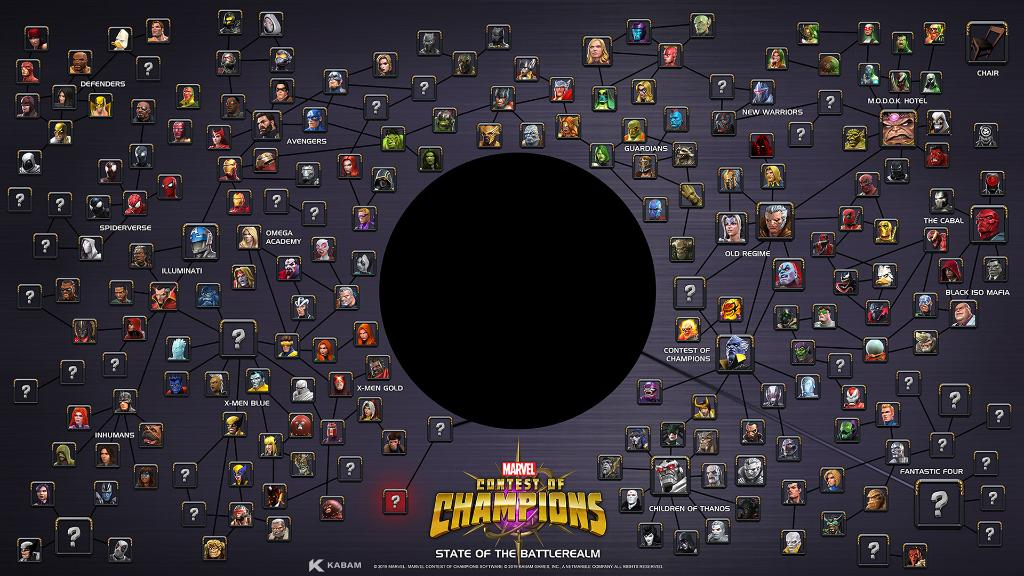 Just a few guesses for the champion puzzle.

The GIANT space in the middle: Galactus.

Next to Goblin and Iron Patriot: Ultimate Goblin.

Next to Surfer: Mr. Fantastic.

Next to Mephisto: Dracula, Surtur, or Enchantress.

Next to Collector and the other Elders: Another Elder (who knows which) or an OC.

Next to Cap. Marvel and the New Warriors: Nova (I’m guessing Sam Alexander since he’s a member of the NW but I think most people would prefer Dic- Richard Rider)

Next to M.O.D.O.K. and the New Warriors: Other NW members (I don’t know them that well. The only others members I can even name are Speedball and Namorita, and she’d probably be next to Namor, not Mr. Potato Head)

Characters beneath the GIANT spot: Idk, but the glowing red one scares me. The only other glowing red character in here is Power Stone Amped Champion after all. I’m guessing OCs.

Next to Cap, Widow, Bucky, and Killmonger: Zemo and (I REALLY wanna say something cool but it’ll probably just be:) Movie BW.

Next to Sunspot: Firestar?

Next to the various Weapon X experiments: Daken and...?

In the middle of the X-Men: Xavier.

Above Emma and next to Iron Man: Cloak and Dagger?

Between the four horsemen of the apocalypse: Tell me with a straight face that that’s someone other than Apocalypse.

Next to Blade and Morningstar: Elsa Bloodstone.

Beneath Morningstar: Swamp Thing and... *Furious searching through Wikipedia*

Next to Spiderverse: I really want to say Morlun.

Next to Spider-Gwen: Lizard and another spider (Spider-Woman?).