he's in my BG, he's a good guy and will do good things. He's definitely game smart and decently skilled, excited about his addition

That’s good to know, fingers crossed he can have a positive impact on the game!

he's in my BG, he's a good guy and will do good things. He's definitely game smart and decently skilled, excited about his addition

I know he's very knowledgeable, he's a solid game player, he cares about the game, and man he really should have changed his handle before joining the company.

An overwhelming majority of people have not asked for this and simply do not want you spending time on it. Just look at the Disagree ratio on your original post. There are 4-5 YouTubers I can name off the top of my head that have their own tier/rating system. And let's be real, their assessments of the champions are likely to be far better than any rating system you guys come up with.

Will you listen to the gaming community or ignore them (yet again)?

P.S. There's no reason to discontinue buffing old champions, especially if you're asking the community to do the testing on all the new champs for you. If anything, that should free up resources.

While maybe not in this exact implementation, I think a lot of people have wanted to make sure that a new Champion they've been looking forward to had been better than what they got. I'm sure that many would have loved for something like this to be in place for somebody like Super Skrull when he was released. The bones are there, but his numbers need some juicing.

The numbers are not Assessments, they are visual interpretations of Data that show how Champions stack up in different aspects. This is not a Tier list, but a summary of their abilities to do damage, sustainability in a fight, and more.

We are not asking for anybody to be doing any testing. Players will continue to play as they always have, and we will collect Data exactly as we always have, but will now be actioning on that Data instead of just looking at it.

Miike, you're killing me, bud. Don't tell people you haven't been using the data for meaningful action all this time, because that's not the case.
Maybe you guys need to contract with some people that are better and more nuanced at the game than your existing staff*. The biggest problem is that it shouldn't take months of assessments and collecting vast data sets to figure out how well a champ fits their intended role. Why is it that we can figure it out so quickly and it takes your staff so long? Sometimes you don't need Big Data when you control everything from the champs, to the environment. The only thing you don't control is us; but we can be simulated. Assume that you give your assessors access to all rarities and sig levels with a 100% full roster accessible. Top skilled players give assessments. Very low skilled noob players gives assessments. Mid-level players give assessments. Hopefully these people will give nuanced opinions from a broad set of viewpoints, otherwise why did you hire them? What are several million more points of data acquired over months really adding except more work for you all and frustrating uncertainty for your customers?

*Meaning able to play with a certain level of skill, know what their observations mean, and translate those to people with a higher or lower skill level in a variety of conditions. Some high level players suck at this and some low level player are great at it. It's an important skill to have in the team to maximize the effectiveness of your testing.

As an expert in this game, tell me: across all the players in the game, which champion performs better: Angela or Ghost. One of those champs is used more often, completes more content, dies less often, earns more rewards, costs less potions to run, gets ranked up more, in an overall sense generates more benefit to the players that use her.

It is easy to say which champ is "better" or "worse" on a spreadsheet or in a video. No game is balanced that way. Games are balanced based on actual performance, not what people *think* the performance should be.

If the data says Angela, a lot of people would say well, the data is wrong, the reason why Angela looks better is because people just aren't good with Ghost, but Ghost is *obviously* a much better champ. Those people are wrong. No champ is good in spite of their actual performance when used by the players of the game. A champ is only good *if* it performs well across all the players of the game.

All you have to do is ask any strong player, and they'll tell you Ghost is better, and it wouldn't take but a few seconds. The problem is those people have a 50% chance of being wrong because their expertise is on how to get the most out of a champion, not on how average people play champions. In fact, their expertise probably makes them less likely to get the answer right, because their opinions will be skewed by their experience.

Angela gets my vote.

Or they spend a lot for cavs

Then tjose guys have to buy the risk that their champion gets nerf?

As someone who commonly does those arena grinds - and will continue to do them? Yup!

Not everyone has the same perspective as others to Champion acquisition. It's still worth it - so people will still grind. But hey, maybe they won't grind QUITE as hard and we'll see scores drop! I wouldn't complain about that!

That’s not weird she is awesome

Re: We still got 2 weeks 'til we get new content?

I supposed NEXT week its for New year lunar

Corvus and his evil fingers

Thanks kabam for this wonderful new thing 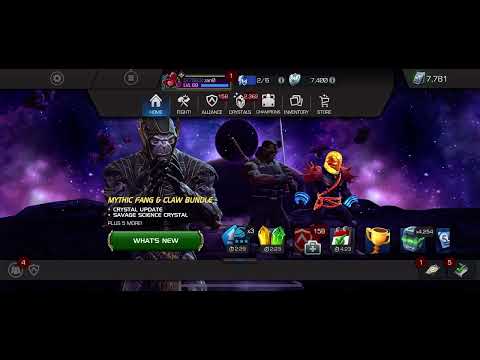 Here you guys go again with something else that we didnt need in the game im done spending with you guys period..You guys always seem to make everything worse with the game... Instead of balance come out with new content or change chaacters special attack animations or something but this is trash.... My wallet is permanently close and will never ever spend with you guys again...

Hard Disagree. Balancing is MANDATORY in all games like this, and we have lagged behind because we haven't had the ability to really communicate where a Champion should be before they're out in the wild, and this helps with that. It won't be perfect, which is also why we're integrating players into the change process as well.

If balancing is mandatory for game health, why are the devs not immediately going after Quake, Ghost, and Corvus? They have done more to imbalance the game than everyone else.

Good question. Why are the devs trying to refocus on rebalancing champions shortly after they come out rather than much later? Same answer. The longer a champion is, the harder it is to rebalance because the wider the impact is and the more entrenched the users of that champion are.

There are no absolute rules when it comes to game operation. Everything is a compromise between competing forces. There are absolutely no free lunches. Give the players less rewards and they will balk. Give them more rewards and you force downstream changes they won't like. Nerf a champ and you'll piss off some of your players. *Don't* nerf a champion and you'll anger others in a different, possibly invisible way.

Players often say that if the devs are supposed to do a thing, why don't they always do that thing: if they aren't supposed to do that thing why don't they never do that thing. Because every action they take helps something and hurts something else, and thus every action has to be calculated to do more good than harm. Reasonable intelligent people can disagree on where that line is, so no decision will ever be universally seen as the right one. For example, I argued strongly against the Guillotine 2.0 buff. I believe I was on solid grounds. The devs did it anyway not because they ignored me, not because they are stupid, and not because they are incompetent. They did it because they disagreed. It can be a tough pill to swallow, but sometimes that's all there is to it.

The devs know that if they nerf a champ, they will anger some players. If they don't, bad things happen to the game that ultimately worsen the game experience for some players. A dev can decide that nerfing Quake causes more harm to the game than good, but nerfing champion X four months after release does more good than harm. That's a judgment, and different people will disagree about whether that judgment is the right one. But whether it looks consistent from the outside or not, it is still a judgment they have to make based on what they think the right choice is at that time.