A Comprehensive Guide to 5.2.4: Lines in the Sand

Hammerbro_64 Posts: 6,783 ★★★★★
December 2019 edited December 2019 in Strategy and Tips
I see countless posts of people stuck here on there quest to become Uncollected, and I wanted to do an in depth focus on different ways to handle it. So here we go!

Table of Contents
1. Global Node: Masochism
2. Counters
a. Basic Hit Debuffs
b. Block Proficiency and Regen
c. Champion-Specific Counters
d. Miscellaneous Strategies
3. Boss and Her Counters
4. Easiest Paths and How to Deal with the Tricky Fights

1. Global Node: Masochism
Here is the real reason so many people struggle with this quest: Masochism. Inflicting a debuff will instantly remove it and heal the enemy for 5% max health, with a seven second refresh. That means relying on parry is out of the window for many many champions. Let’s talk about how to deal with it.

2. Counters
There are many many many counters and ways to handle Masochism that I feel many don’t consider. Let’s break them down:

a. Basic Hit Debuffs
Examples: Venom, Luke Cage, Gwenpool, Annihilus, Wolverine Killmonger, etc.
The overall strategy here is to inflict enough debuffs that you will always be in that 7 second cool down when you want to parry. Most of the above can get 2-4 debuffs on a combo, so that won’t be a problem if you play aggressive enough. The only issue you may face with this strategy is not being able to overpower the regen. Most 3/30s with some damage over time and pretty much all decent 4/40 can out-damage the regen, so unless you are playing with weaker or underleveled champs, there won’t be too much issue.

b. Block Proficiency and Regen
Examples: Any Captain America (CAIW is the best), Wolverine, X23, Blade etc.
This is probably the first thing that comes to mind when considering who to bring to handle masochism. It’s definitely not a bad idea, especially if you use two tap parrying (I’ll explain in Miscellaneous). The goal in this strat is pretty obvious: sustainability.

Omega Red: Each death spore reduces the chance for masochism to trigger by 10%, so if you have 10 spores, it will never trigger.

Sabertooth with Killmonger Synergy: you can also use either Black Panther for this synergy as well. 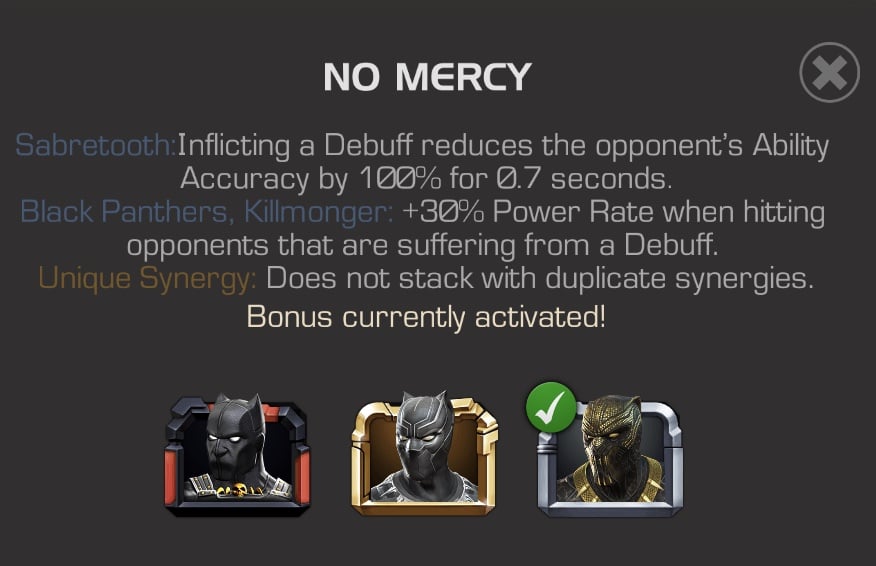 This means masochism will never trigger against Sabertooth. Do whatever you want.

Stark Spidy: He doesn’t need to block, and his play style is as such that you don’t need to block. There isn’t really anything specific he helps with except taunt debuff after every 5 hits that would trigger masochism. He has high damage and can get you out of specials like War Machine and Punisher.

OG Thor: Little known fact, he is I believe the only champion whose parry-debuff, in this case Armor break, triggers before the stun, meaning Masochism will remove the armor break and not the stun. (I’ve checked and Blade, Corvus and duped CAIW all do not work). You can freely parry with him.

Annihilus: He has a 60% chance to inflict debuffs on hits against the enemy, in particular on block, so if you have not quite mastered intercepting, he is very handy.

Void: If you are struggling to create enough damage output, play him, and parry before your intimidating presence debuff triggers so it doesn’t get shrugged off. Basically here you are just reversing the regen. It’s not worth bringing him unless your guys can’t generate damage to overcome the regen. Not really great otherwise.

d. Miscellaneous Strategies
i. AAR/Glancing
Examples: Domino, CAIW, Archangel etc.
This will increase the chance that a debuff doesn’t trigger masochism. This isn’t a counter per se, but it can help out. The only one who it is a complete counter for is AA with 3-4 neurotoxins.

ii. Special 1 Bait
A basic strat you should implement in general, don’t give them regen when you don’t have to. Push them to special 1 and bait it out, then counterattack. You will have to parry much less than if you just play until they feel like throwing a special or wait until 2.5 to bait.

iii. Two-tap parrying
Saving probably the best for last: the two tap parry. If you have played Quake before and can at least play her evade-stun style, you can use those timings, but against your block. You would initially get your parry shrugged off, but if you release and instantly put it up again when your opponent’s second hit would strike your block and you will get a parry. I would highly recommend messing around with whatever Quake you have and learn her evade-stun style and the timings for two tap block are the exact same.

Alright, now that you know how to work around masochism, lets talk boss fight

3. Boss and Her Counters

Nothing too hard about storm in and of herself except you REALLY don’t want to mess up timing your dodge on her L2 or you are pretty much toast. With the recommended path, you would have to face storm when she has Caltrops. Basically whenever you dodge back, you gain a stack of bleed. This means you NEED to pack a bleed immune to handle her. She has some other nodes that don’t really do much. While any bleed immune works, I would say Luke Cage would be my top pick for this fight. He has basic hit debuffs to deal with masochism, good damage, AAR if you can manage to get an L2 off and not lose the resulting concussion, and if he’s duped, you can tank an L2 with his indestructible buff. Omega Red also works well, since you will have death field up more or less the whole fight. Now, for Omega Red, be cautious, because the bleed does stack, and too many stacks will be a little too much for him. Limit your dodges to allowing like 3 stacks max and you should be fine.

4. Easiest Path and the tricky fights: 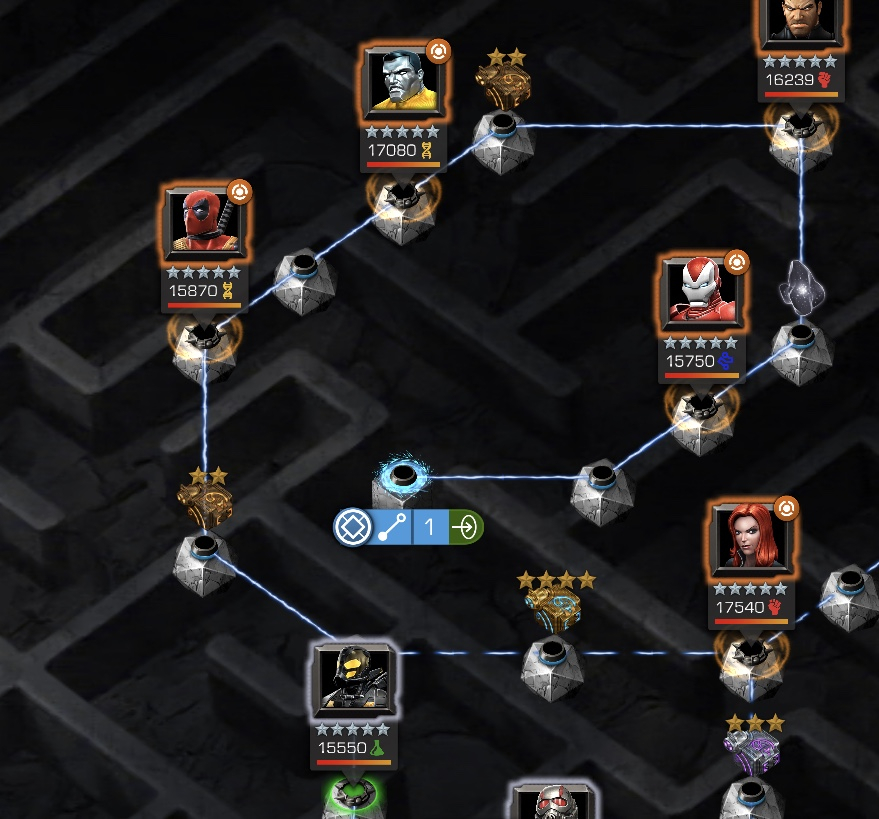 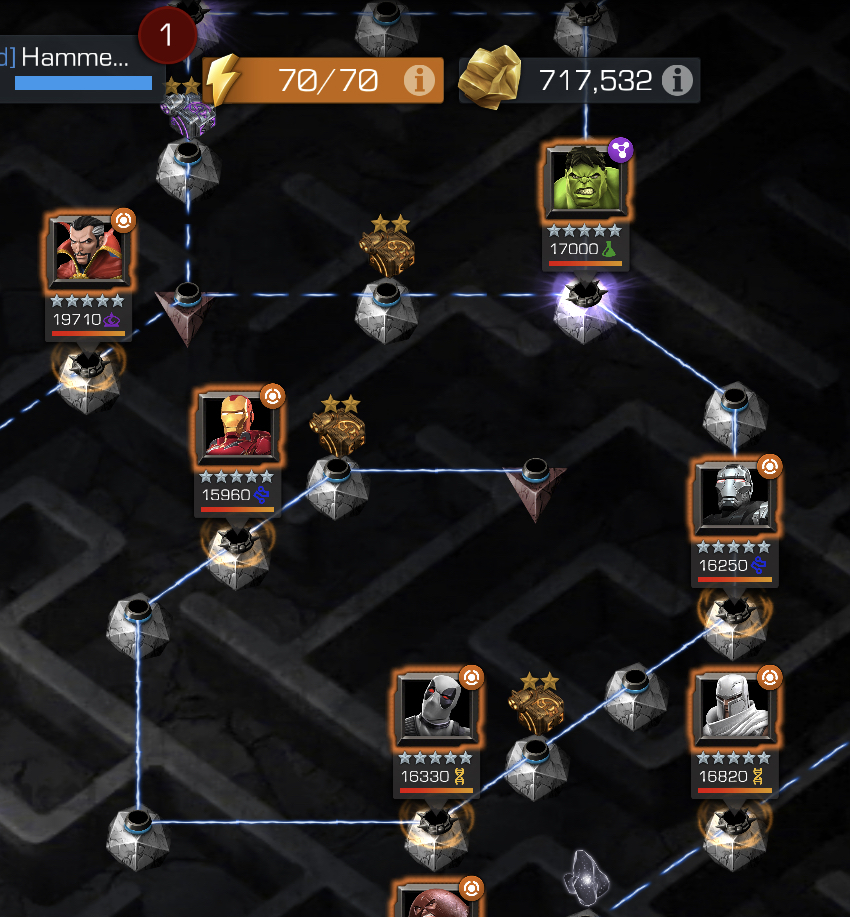 By far the easiest path is the one that starts with Deadpool. I have the fights shown below. None of them are very hard enemies, but Punisher and War Machine may be pains because you will take some block damage against them. Consider bringing a sustainable champ for the two of them. One Big big thing you should not ignore, is the fact that there are two ambush champions, one of them isn’t too hard (I can’t remember who), but the other is Cable, who will degen you if you bleed him. Make sure, especially if you are going for the basic bit debuff strat, that you have some Masochism counter that doesn’t inflict bleed or you will be in for a bad time. LC is great for this fight, because not only does he not inflict bleed, his exhaustion stacks reduce power gain, so Cables power flood buffs won’t be as effective. Probably the trickiest fight for me was actually the YJ at the beginning of the fight. I kept getting clipped by the L1. Well, if you want to avoid that, you need to end your combos on your third light then create some space (MLLL⬅️). Here is about the optimal space to be to avoid it.

You can pull it off if you are a tad closer, but it’s fairly risky. Just keep your distance and don’t end combos on a medium if you don’t want to get clipped or take block damage.

So TL;DR
You can either intentionally inflict debuffs so you can always parry, go for sustainability, use some specific champion counters like Sabertooth+KM or Omega Red, maybe try AAR, go the path with Deadpool Red, and pack a bleed immune like Luke Cage for the storm boss!

I hope that helped some folks get past the biggest roadblock in story mode. Any questions about team setups? Ask and I’ll do my best to give you good feedback on who to bring. Have any other strategies I forgot to address? Put your own strats in the comments! Best of luck, all!
23