Home› Strategy and Tips
**HOTFIX AND GOODIES**
Our latest Hotfix is now live for both iOS and Android! Please manually update your game. Additionally, because of the bugs’ impact on energy refill consumption, we have provided summoners with Energy Refills and a few other items to assist in the Contest! Sign in and check your messages now to claim yours!

Weknowwho Posts: 10 ★
July 2021 edited July 2021 in Strategy and Tips
Venom or CGR as first r3? I am halfway done with act 6 to get TB (and thinking one of these r3 would help that a lot). Still need to do a number of the variants as well.

CGR is a monster obv, but some friends also say they have both and value Venom more for more diverse content. Since it has taken me a hundred years to finally get a t5cc I dont want to waste the opportunity to boost the account with this pick. Backstory: As 5 stars I have both cgr (r5 unduped) and venom (duped r4) and CMM as a r2 six star but I am not considering her. I'd much rather a fast champ than a ramp up at this point. I have Angela but not duped at r1. And dont have corvus as a six. 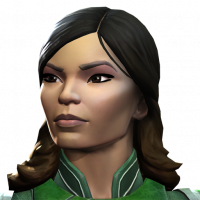