Here are the numbers that you can expect going forward: 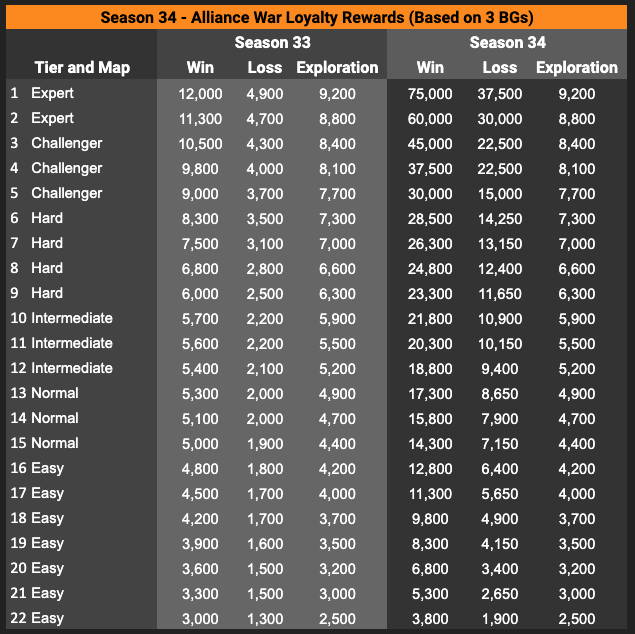 Note: There are no changes to Exploration. Those figures are added for ease of reference. There has been no change to other sources of Loyalty, and you can still obtain it from War Victor and Challenger Crystals, Alliance Events, Solo Events, and by Helping your Alliance Mates.

With these changes, we want to make Potions more accessible than they were before Compensation started, but the number of potions given out for compensation was excessive, so we will be cutting back a bit from that number. We are aware that Health Pools have increased and are accounting for those in our new Potion economy numbers as well.

However, we wanted to swing a little further with our changes and took some inspiration from our Community…

40% Health Revives in the Loyalty Store!

We will be adding new Level 1 Alliance War Team Revives that heal your KO’d Champions for 40% of their Total HP to the Loyalty store! These new Percentage Based Alliance War revives will be available for just 1 Loyalty with no Purchase Limits!

This not only makes Revives more accessible, but also contributes 40% of a Champion’s Max Health, reducing the amount of Potions needed to heal a Champion after a KO!

This is still a very experimental change and is subject to some changes in the future as we see how it goes. We may find the healing is too much or too little, or that different tiers should have different amounts healed, among other factors.

In the future, we also plan to exclude Revives from counting towards your Item Limit, but that will not be in place when this first launches.

Lastly, we want to give a huge thank you to DNA3000, whose thread here on the Forums inspired this change!

With the weekly compensation coming to a close, we think that free Revives will continue to help Players feel less of a burden from deaths and the cost of Consumables and reduce the Potion cost of recovering from a KO in Alliance Wars.

This is not the final change we will be making to Consumables. We’re going to closely monitor how Potions and Revives are used in the coming seasons, and the relationship between their use and Alliance Wars, and look to make more changes in the future.

Season 34 of Alliance Wars starts on May 25th, 2022, and these changes will go into effect then!